The reason I became a midwife is because of the deBy Birth Stool.  The story goes as follows, but first I need to give a bit of background information.

I was born and raised in Amsterdam, the Netherlands. One of 8 children born at home. 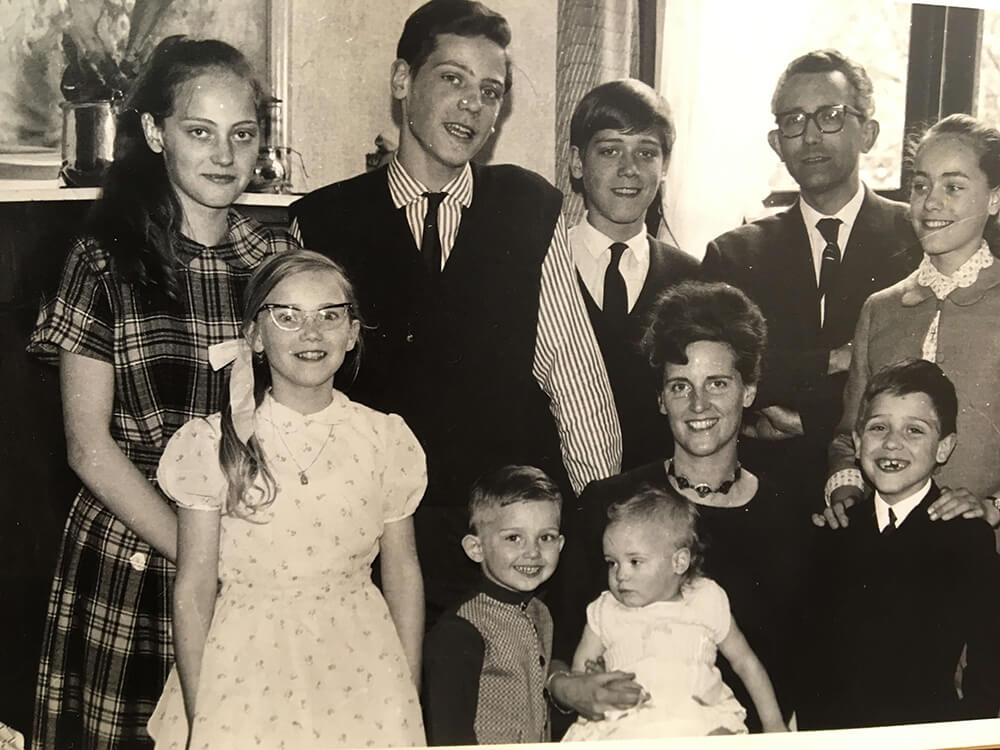 I fell in love with an American man when I was 27 years old and I had my first baby with him two years later in Amsterdam, at home with my best friend Conny deBy as my midwife. 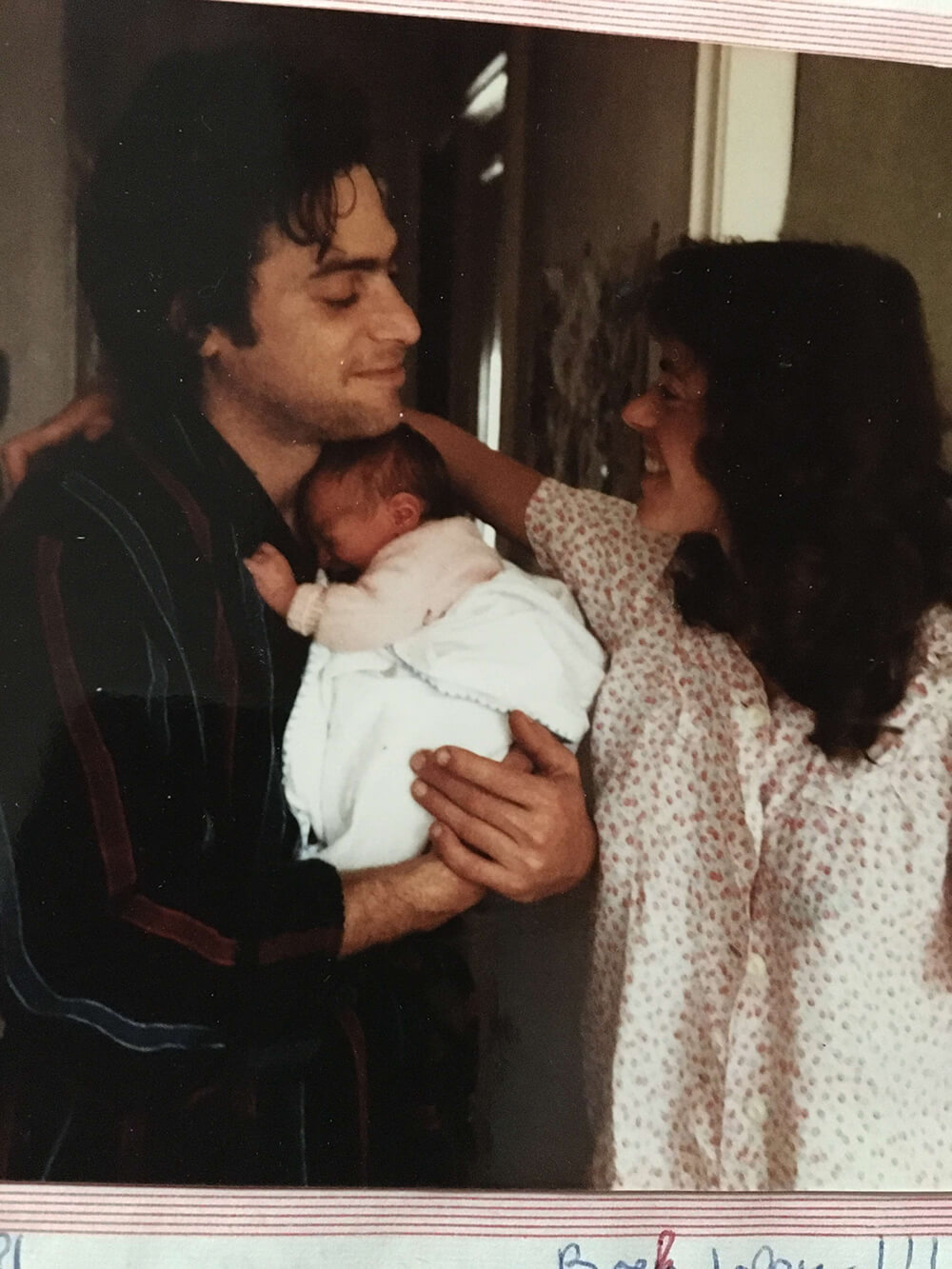 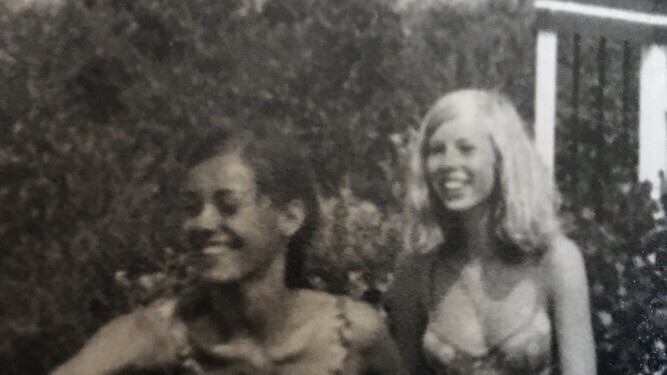 Conny and I have known each other since age 12. After high school she went to midwifery school and she became a homebirth midwife. Conny is now retired after 40 plus years working as a home birth midwife in Amsterdam. She has delivered almost 10,000 babies during her career. 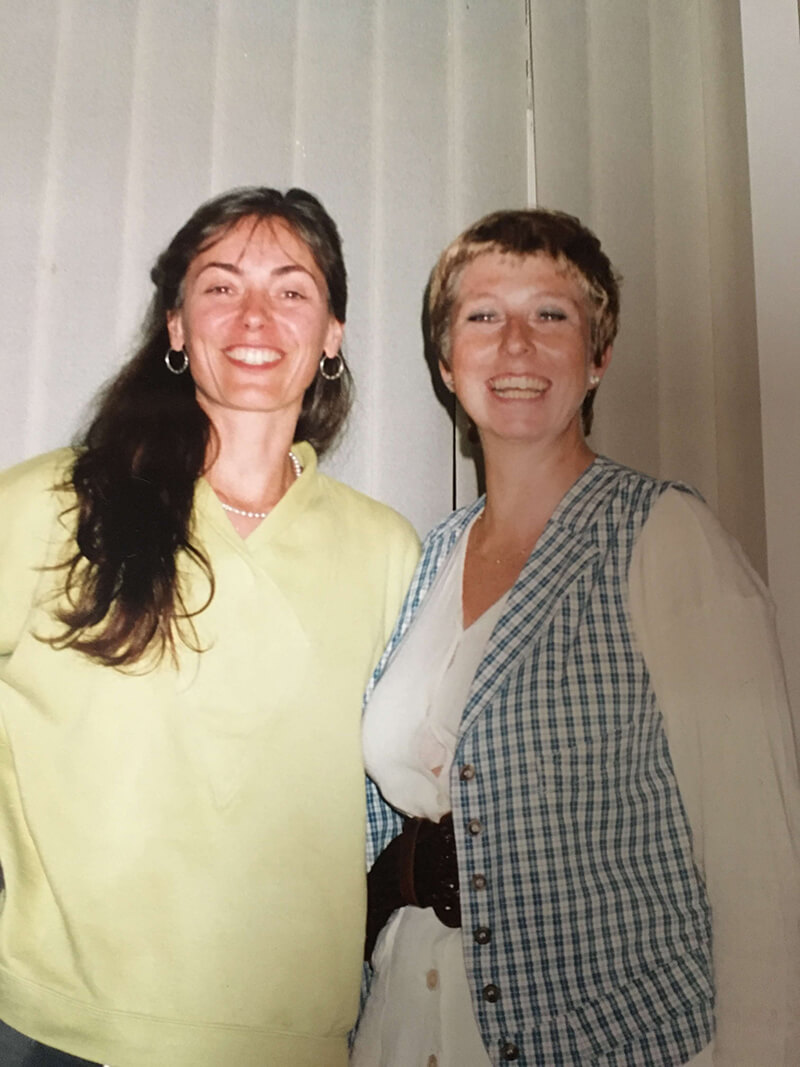 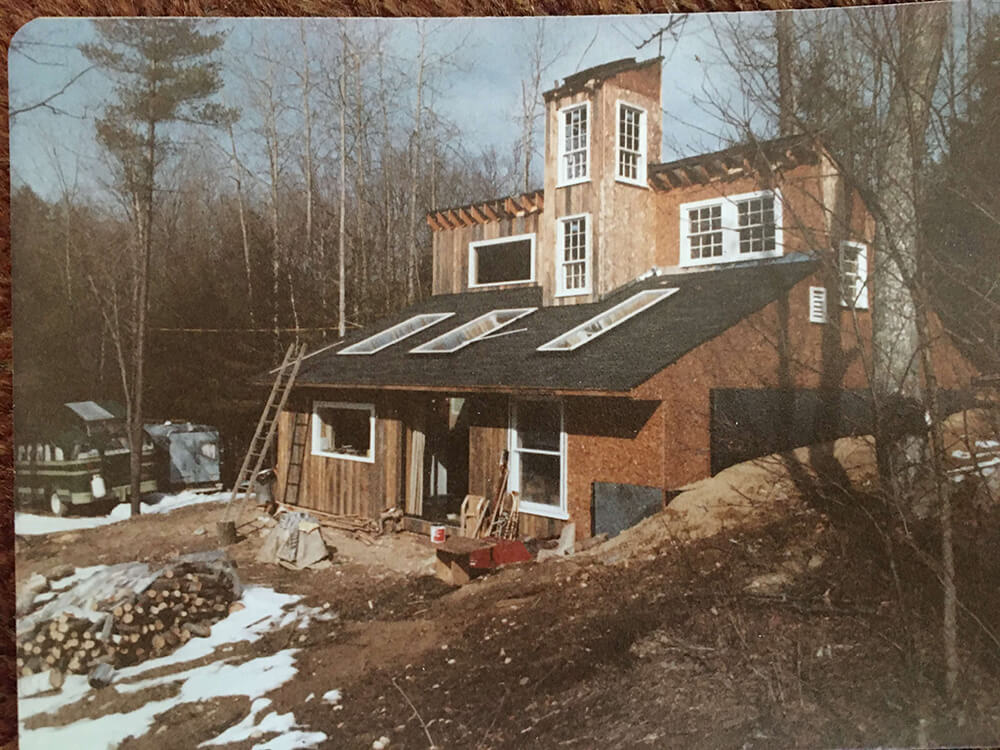 Six months after our daughter’s birth in the spring of 1982, my husband Ken, our daughter Swaan and I moved to Barrington NH, where we build many houses including our own. 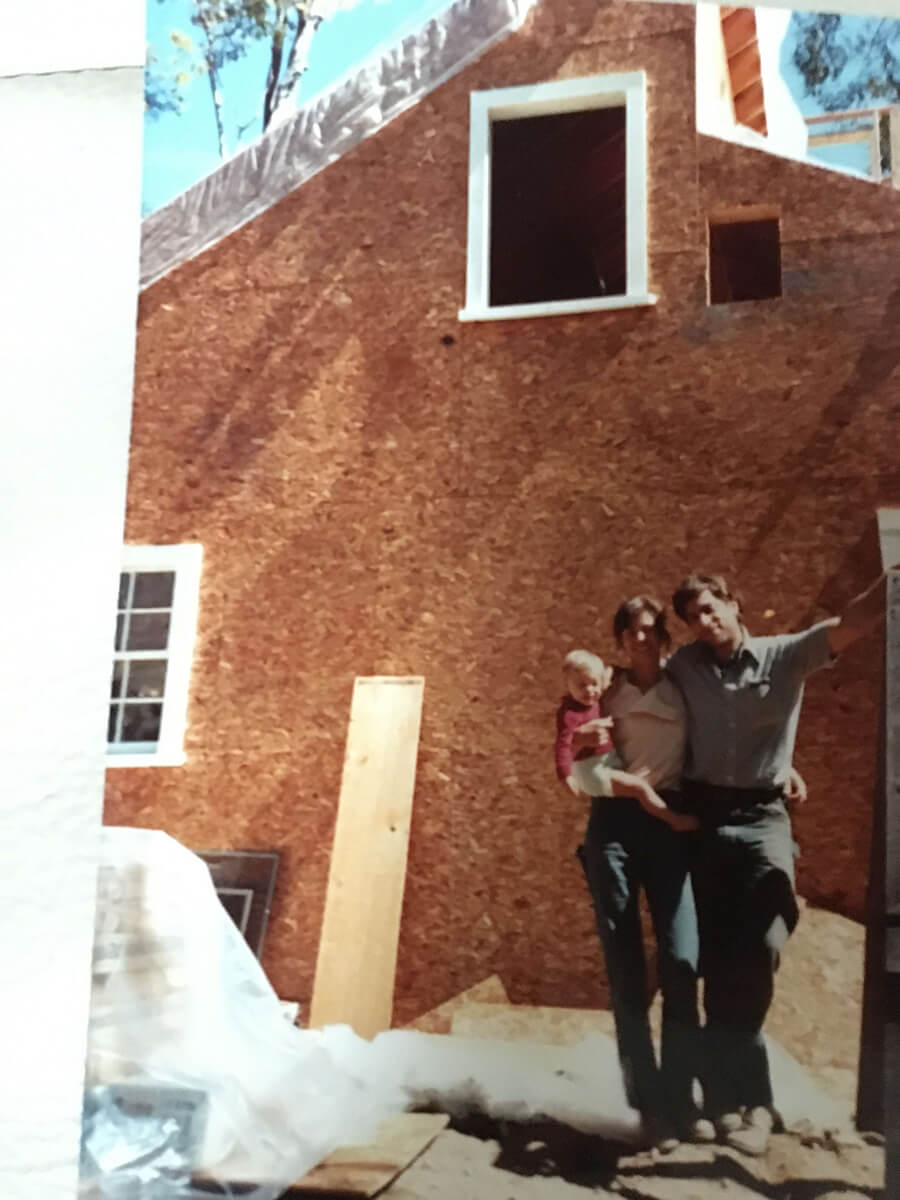 Six years later I got pregnant again. I was hoping to have another home birth and finally found the only midwife doing home births in our area. While I was pregnant our family traveled to Amsterdam, where my midwife friend Conny pulled me into her office to check me out. I left her office with a contraption, the precursor of the now streamlined version of deBy Birth Support.
While visiting with Conny, she told me the story of how she came to design the current shape of the birth stool. First of all, she had a very busy practice, with many women of different cultures living in Amsterdam. She noticed over the years that some women, particularly women from Morocco and Turkey, took significantly shorter times of pushing their baby’s out. The reason for that was that most of these women liked to squat and push their baby’s out. They often still did many house chores squatting and therefore their legs were very strong. Conny also knew that most Dutch women, not used to doing their chores squatting, their legs weren’t strong enough to do the same as the women from Morocco and Turkey.
One day Conny walked past a dumpster in Amsterdam and saw an old discarded office chair in there. She took it home and sawed some pieces off of it and voila, she had a birth stool that mimicked squatting. Over time she re-designed it into today’s streamlined model.
I gave birth to my son Joe on the deBy birth support, all 10 lbs of him here in my house in Barrington, NH. I felt so much better being in charge; that’s what it felt like sitting on the stool, with gravity helping me.
Because I liked giving birth on the stool so much, the idea grew in me to start a business to sell birth stools here in the USA.  I called Conny, who had the stools patented in Europe and sold them there.  I worked out a deal with her to start selling the stools here in the US.
We’re talking 1989 here.  Computers weren’t as mainstream as they are now.  I didn’t even have one yet.  To get the word out I advertised in midwifery magazines, by sending out flyers and by going to Midwifery conferences.  It was going to these conferences and talking to all of these midwives that the idea started to grow in my head, that maybe I should become a midwife.
During this time my family and I traveled to Amsterdam to visit my family.  When I saw my friend Conny I talked to her about my thoughts of becoming a midwife.  She was very positive and invited me to come to a birth that same afternoon.  That birth on the birth stool was the last push for me to pursue a midwifery career.  Conny talked me through how to deliver the baby, she instructed me where to place my hands, and with her hands over mine, I delivered my first baby that afternoon. I was hooked immediately.  I went back home and enrolled in a midwifery course and I went to UNH to do A&P courses.  At that time there were no home birth midwifery schools like there are today.  The state of NH had guidelines, rules and regulations in place on how to become a home birth midwife, but how you got there was up to you.
Conny helped me to enroll into a midwifery program offered by the Dutch government, and she also offered me an apprenticeship.  At that time she had 30 women due every month between herself and her partner midwife.  I apprenticed with both of them and learned a lot very fast.  I wound up apprenticing with 16 different midwives over the course of 3 years. As a midwife in the Netherlands you also have hospital privileges.
In 1993, I started my own midwifery practice here in Barrington NH, where I’m still catching babies today.  Now, 28 years later I’ve caught around 700 babies in my practice in the Seacoast of New Hampshire area, some in Northern Massachusetts, and some over the border in Maine.
There are around 33 home birth midwives in NH, and we are all State Certified.  I’ve served on the State of New Hampshire Midwifery Council Board, where I was appointed by the governor. I served for 2 terms amounting to 8 years.
I’ve served 2 terms as president of the New Hampshire Midwives Association, as well as 2 terms as Vice President, and 2 terms as Secretary. As I write this, I’m the Vice President again.
It’s safe to say I use the deBy Birth Support 85% of the time in my practice.  Some women may be hesitant at first to sit on the stool, but as soon as they do, most do love it.
It’s been over 30 years now that I’ve been selling the deBy Birth Support. I’m a great fan of it, and so are my moms!

close
close
Start typing to see products you are looking for.
Scroll To Top

Looking for birthchair.net? You're in the right place! Welcome to our new and improved site!